No fabric in and 2 yards out this week.

The fabric swap that my guild was planning for the 17th was cancelled due to weather and rescheduled for the 24th. I have a grocery sack two-thirds full of fabrics to destash, but I won't count it out until it's gone.

The two yards out are for damaged pieces I found when going through my stash that were thrown away. I had inherited some quilting cottons from my MIL and she hadn't sewn for at least five years before she died in '08, so there were some aged scraps that had become faded in places, etc. Also, some of her fabrics smelled like turpentine and had what appeared to be oily stains and discolorations along the fold lines. I definitely don't want these to contaminate my good fabrics so it's best to get rid of them. Out they went.

I'll total up the ins and outs for the month next week. I have a lot to unload at the fabric swap, and I hope I don't bring too much home.

I will say, though, that someone else's discards could be my inspiration. Three of the fabrics in my Plus Dash top were acquired at last year's fabric swap, the turquoise at upper right, yellow at left, and coral at bottom center.  The yellow print actually inspired the palette. 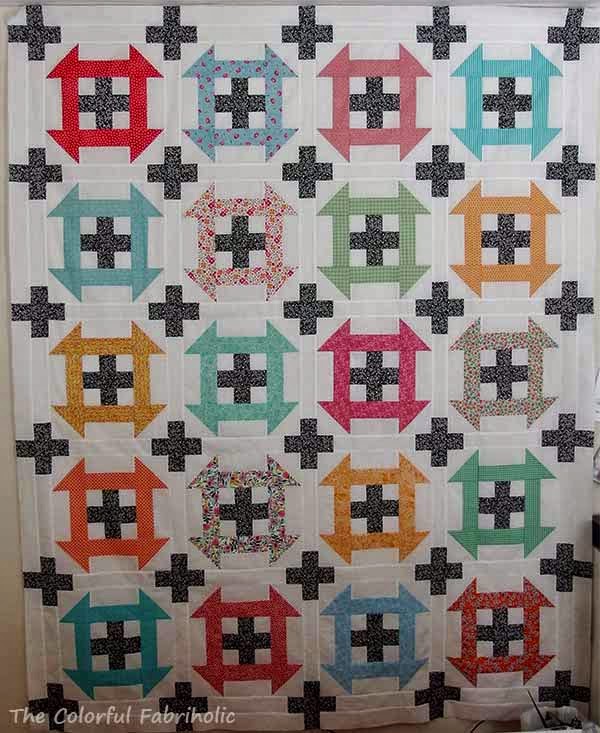 Plus Dash top with fabrics from last year's fabric swap

Linking up with Judy at Patchwork Times. Check out everyone else's stash management efforts over there.
Posted by The Colorful Fabriholic at 6:48 AM