I can't actually show what's on my design wall today; still working on a confidential project.  But I do have other stuff I have to get done this month....

One of my August goals is to get hanging sleeves and label covers onto the quilts I plan to enter into The Quintessential Quilt 2013, the juried & judged show produced by Circle in the Square Quilters which hangs in the University City MO library in October.

One of the quilts I will enter is a memory quilt I made for my dad for his 80th birthday in 2007.  It's hard to see here, but almost every block has text in the white band. The phrases were actually printed using my printer and freezer paper-backed white batik fabric. This quilt is twin size and he actually used it as a bedspread. 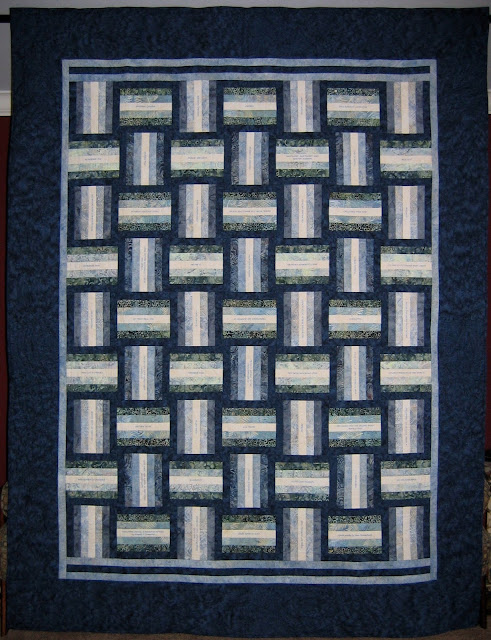 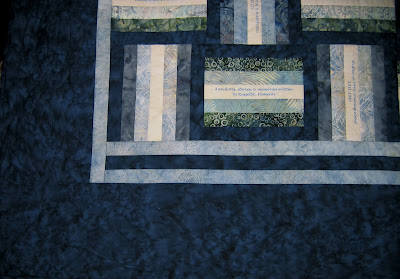 ﻿
Dad was always a good storyteller. In 1995 he wrote a memoir, a collection of 56 one page stories, anecdotes, and essays about his life. They were mostly about his younger years and his experiences growing up and in the Army. The phrases printed on this quilt are the titles of his stories.  He titled his book "A Legacy of Episodes" and I named this quilt "Legacy."  The bottom row of blocks serve as the quilt's label. They explain the phrases,  note who made the quilt, and conclude with "Happy 80th Birthday, Dad."  The only time I ever saw him with tears in his eyes other than at my mother's passing was when I gave him this quilt.  He was very appreciative of the "blanket" I made him!
Unfortunately the quilt had to come back to me.  Dad has severe dementia.  He lives in a care home in Arizona.  He has now declined to the point where he can no longer communicate.  He was a man whose whole life was about communication: Signal Corps in the Army, long professional career as an executive with AT&T, exceptional writer, personable speaker who could pontificate - at length! - on any subject.  He always had something to say, and he was not shy about saying it. Now, sometimes his lips move and the barest whisper might come out, but if there's any words, they don't make any sense.  This once-great communicator can no longer communicate.
I suppose photographic memory quilts are more visually interesting, but when you have words and phrases to work with, you end up finding a way to create something that features words and phrases. I don't know if "Legacy" will be juried into QQ13 because it's not exceptional in workmanship or visual interest, and the quilting is all in the ditch so the stitching doesn't even show. The library has room to display only 17 large quilts where QQ13 hangs, so this quilt will likely be juried out.  But if it gets in, I hope it hangs near the stairs where people can see it closely enough to read the words.
So this week I'll get the sleeve & label covers on "Legacy" and I'll continue to work on my other project.  Hopefully I'll have something more interesting to show on Design Wall Monday next week. Linking up with Judy at Patchwork Times - check out all the inspiring projects over there.
﻿
﻿
﻿
Posted by The Colorful Fabriholic at 6:16 AM