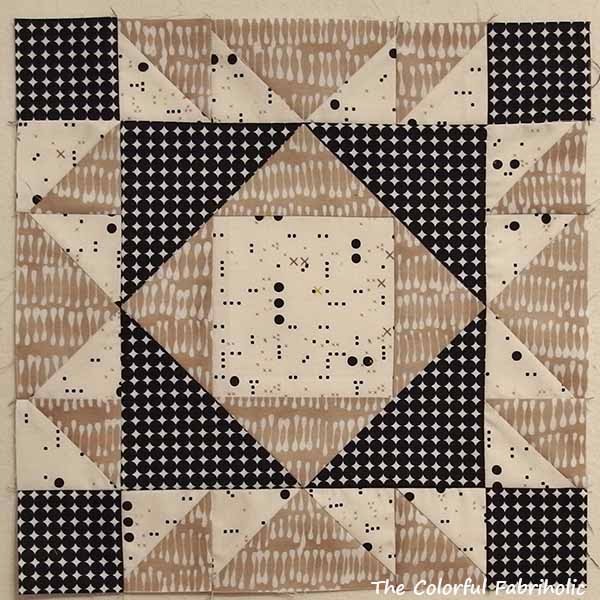 This is so wrong on so many levels that it's not even worth fixing. Chalk it up to a learning experience and move on. In addition to the pieces on the left being turned in the wrong direction, the value placement isn't very effective. There's not enough contrast between the taupe print and the ivory dot, and maybe the placement of the taupe and the black should have been switched.

I really need to use the black dot and the taupe print in one more block because they haven't been used enough in my sampler. So far they're in only one block each, and to add continuity to the sampler I'm using each fabric in at lease two, preferably three, blocks. I have only one block (which was supposed to be this one) left to make of my 22  12" blocks. Come back tomorrow for Design Wall Monday and I'll show you the rest of them.

I have a plan for a better block using these two prints plus white, which I'll get done sometime this week. I worked it out in EQ and it looks much better than the unfortunate block above. I'll donate the one above to the freebie table at guild and maybe someone else can do something with it. Or throw it away.

Then this week I'll cut the pieces for the two 24" blocks and package them up to sew at camp next month. One is a swoon block, and the other is just as complicated. I'll need to go buy another 1/2 yard of the ivory dot in the block above because that's my constant light in the two large blocks.

Stash Report:
Last week I forgot to count the 10-yard bolt of white I got on sale. Yeesh, that adds to my yards in for the month. I'll total up all the ins and outs at the end of the month. Nothing in and nothing I can count out this week.

Linking up with Judy at Patchwork Times; check out everyone's stash reports over there.

Posted by The Colorful Fabriholic at 8:41 AM