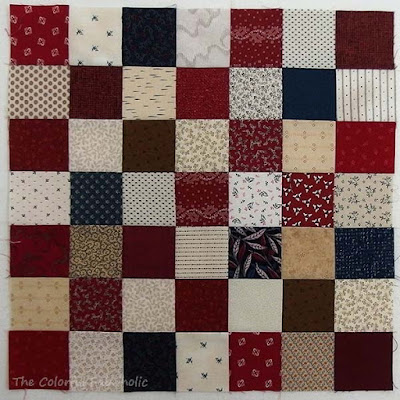 Making one block at a time is very inefficient. It would make so much more sense to strip piece the rows, slice them up, and then piece the checkerboards.

So, that's exactly what I did. I cut 2-1/2" WOF strips from a selection of dark and light prints.  I pieced WOF pairs of dark & light, then sliced them into 10-1/8" pieces. I was able to get four pieces from each WOF strip.

Then I combined the pieced pairs together, mixing up the prints and alternating light and dark, for a strata of six strips. One more strip was added to one end of the strata, either light or dark as needed to alternate the value placement.  Here are seven strata, stacked, to simulate the checkerboard effect. One complete strata is visible on the right. 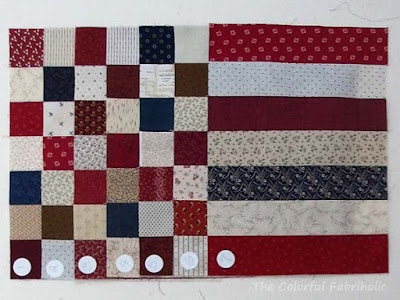 Since each strata is 10-1/8" long, it can be cut crossways into four 2-1/2" strips. Thus, the set above will yield four checkerboard blocks.

Enough strips for eight blocks are shown here and I need twelve blocks, so one more set of seven strata will be enough. 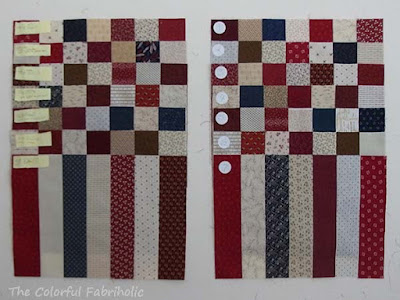 It's so much easier and more efficient to strip piece these checkerboards!
So how does this affect my plan for one checkerboard block a month? It doesn't really matter. I may get some checkerboard blocks made ahead, but I still have to keep up with Dresden plate blocks, so it's not going to make much difference. Just easier and less wasteful of fabric.


Linking up with Sew Fresh Quilts


Posted by The Colorful Fabriholic at 7:47 AM