The Chunky Churn Dash quilt is coming along. More CCD blocks have been added since I made these original ones. 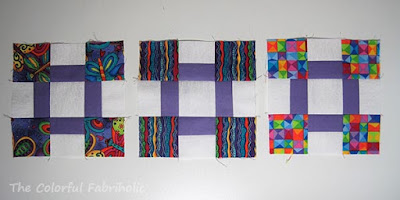 I decided that the CCD blocks need some friends. It seems a shame to cut up the prints into such small squares; maybe some alternate blocks featuring larger squares would work. These blocks all finish at 6". 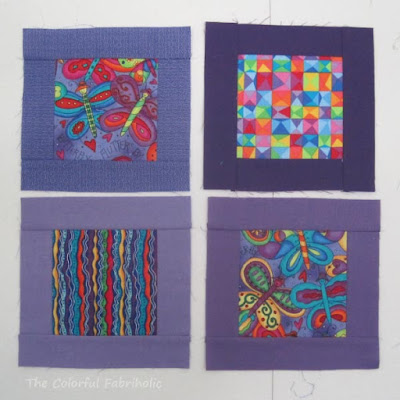 Since I don't have enough of one solid purple for all the blocks, I'm using three solids and one tone-on-tone that reads solid-ish. When they're all scattered around, and also used in the CCD blocks, they'll be fine together.

A 6 x 7 block layout on the wall; I'll add white sashing and purple cornerstones for a top that will finish at 43 x 50".  A good size for a donation quilt for a child. 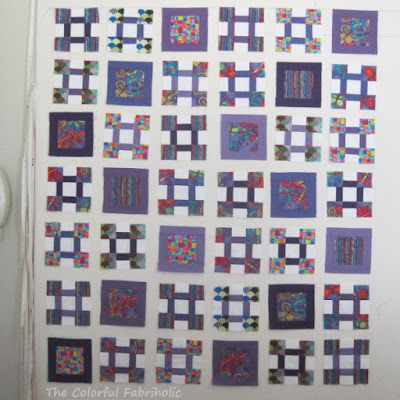 I've added vertical sashing between the blocks to make the rows, and added sashing rows to each row of blocks. Ready for final assembly. 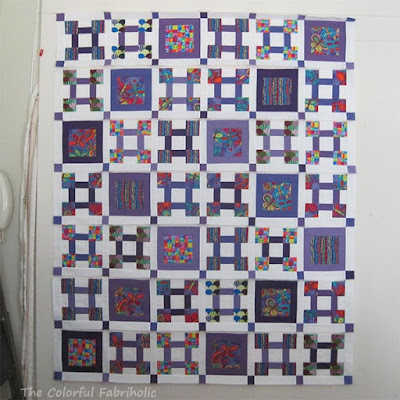 A few row seams, and this will be a finished top. I'm hoping to get it finished before the end of September. I'm giving a demo in October about machine-stitched binding using glue-basting, and I need this to be quilted by then so I can use it for the demonstration sample.

I needed six more blocks than I could make with the pre-cut printed squares I had available, so I made a few more CCD blocks.  I used a Kaffe Fassett fat quarter I had on hand whose colors and geometric shapes worked okay, not perfect but certainly well enough. I have two 6-1/2" blocks left over with no purpose for them; anyone want them? Leave a comment with your email address. 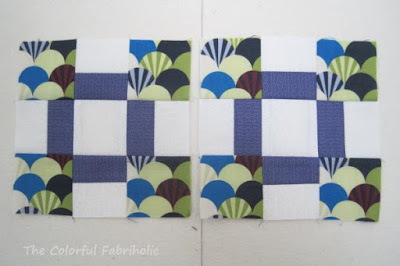 Posted by The Colorful Fabriholic at 5:00 AM