A local shop just finished up a BOM series with a Roman Road theme, a color palette of stone & brick. Each month there was a main block, left, and an alternate block, shown in it's original version at right. 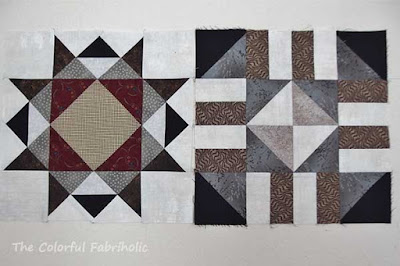 My friend Cherie suggested a variation that would mean fewer seam matches. She changed the four-bar side units of the alternate block to three bars. I mocked it up in EQ for her and we both liked the change. So I took apart my alternate blocks, set the parts aside, and made all new side units.

I had the pleasure of going to camp over this past weekend (private retreat). The opportunity to go came up very suddenly, with no time for me to plan or prep projects. I grabbed the secret sewing and Roman Road, hoping they would keep me busy.

The state this project was in on Friday, was:
- Main blocks, have 12, need 13;
- Alternate blocks: have 4 untouched kits, 8 partially assembled (previously completed and taken apart) blocks. Have 48 replacement side units ready.

Good choice of project to work on! Here's what it looks like on my design wall this morning, after working on it at camp: 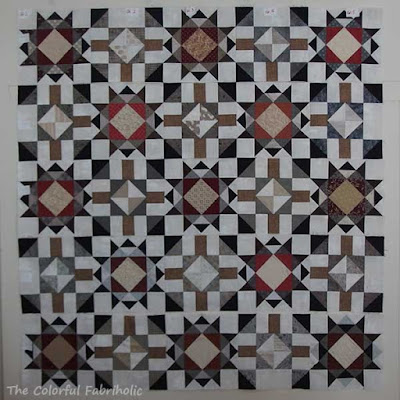 In the photo above, I see one more alternate block turned the wrong way, so I'll have to rip it and fix it. I swear, I have never used a seam ripper so much in one weekend or on one project as I did here. It's a wonder there's anything left of some of those seams, they've been ripped and resewn so many times!

But I'm pleased to have Roman Road so far along. I'll fix the turned block and prep the borders, then pack up this project and have it ready to work on at a different retreat in October.
Linking up with Patchwork Times for Design Wall Monday.

Also this weekend, I was able to assemble blocks into a top for my secret sewing project, a collaboration with Alycia. All I can say is "Wow." The reveal will be Wednesday, so go visit Alycia on Wednesday, then come back here.


Posted by The Colorful Fabriholic at 8:25 AM