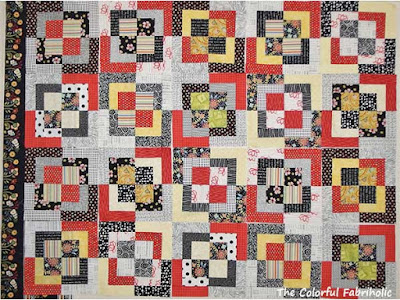 Murphy has settled down a little, so I can snatch some occasional moments in the sewing room. The deadline projects are either done or far enough along that they're off the wall, so I can get back to my Bento Box project.

I had way too many blocks, 32 in all. While most of the blocks have coral in them, some also featured a lot of green. Because of the busy-ness and the riot of color, I pulled out most of the green blocks and used the 20 blocks shown above. Before borders, that will measure 48 x 60; after borders, at least 56 x 68.

That left me 12 blocks with less coral / more green in them so I decided to use them for a smaller quilt. Since there are so few blocks, they were quick to lay out and sew together. I kept the same layout of dark intersections and light ones. 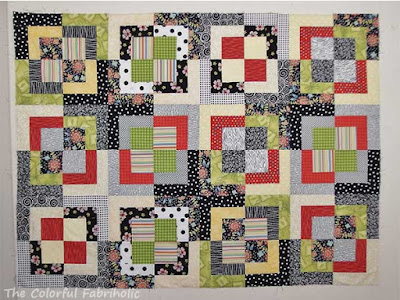 With only 12 blocks, it measures 36 x 48. I don't know about borders yet, it will depend on whether I have enough of the border print stripe left over after framing the first top. If there's not enough, I'll see what else I can find in my stash that will work. I'd like to get it up to at least 42 x 54 for a kid size lap quilt.

The first top, which was taken off the wall in stacks for sewing the rows together, is now at this stage: rows sewn, ready to be pressed so they can be joined together into the top. 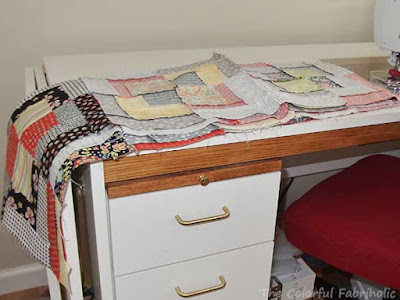 So, progress on two BB variations. I'm hoping I can get the coral top finished including borders this week. Then I can figure out what to do about borders for the green version.


Linking up with Patchwork Times, Em's Scrapbag, Sew Fresh Quilts
Posted by The Colorful Fabriholic at 9:00 AM