I'm participating in the Holiday Tales Blog Hop hosted by Bernie at Needle and Foot, and I have a story to share.

My dad was quite the story teller. He used to make up bedtime stories for my brother and me, and later for our younger brother and sister. The stories usually featured interesting characters, such as bumbling George Henry William Francis Gifiltefish and his sidekick Throckmorton P. Braithwaite the Third.

This story is from 1963. Dad always told stories with exaggerated voice and expression that made us giggle as he was telling them. At Christmas time he made up stories about Santa's workshop and the elves. The head elf was Gherkin; Stringfellow was in charge of decorations, and Thumbsy was in charge of... Well, here's the story.

As told by Russ Pomeroy to his children in 1963

Now as you know, in Santa’s Workshop the elves work all year in preparation for Christmas, for Santa’s big night delivering toys to all the good little girls and boys.  They have production lines for all kinds of things: bicycles, dolls, games, trains and so forth, and also they make all the Christmas decorations. The elf in charge of Santa’s workshop is Gherkin. He’s the big boss of all the elves. It’s Gherkin’s job to make sure everything gets done right and on time.

So Gherkin goes to Stringfellow, the tall, skinny, serious elf who’s in charge of the decorations department. If anyone can straighten out Thumbsy, Stringfellow can.  “Stringfellow,” says Gherkin, “You’ve got to help me out here.  I’m at my wit’s end.  I just don’t know what to do with Thumbsy.  Can you find something he can do right?”

Well, Stringfellow decides to put Thumbsy to work painting Christmas balls. How badly could he mess that up? So he explains the production line for colored glass Christmas balls, and how they get painted.

Thumbsy’s assignment is to dip each ball into a pot of color as it comes down the line.

Oh, the chaos in the workshop! And still the balls keep coming down the line. Faster and faster they come.  Thumbsy tries his best to keep up.

Now Thumbsy, for all his clumsiness, is actually a pretty creative little guy.  He gets the bright idea that if he combines all the paints together he can dump all the balls in at the same time and keep up.

So he pours together all the red paint, green paint, purple paint, blue paint;  gold paint, silver paint, and even pink paint.  But no-o-o orange paint.

Balls keep coming down the line.  Thumbsy dumps them into the paint and pulls them out.  Uh-oh….

All the balls are orange!  There are only ORANGE BALLS!!!!

And orange isn’t a Christmas color. 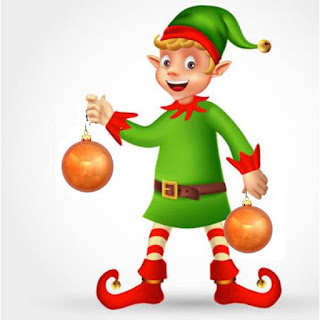