Remember my Log Cabin Triangles? Check out the 2016 QOV Block tab above.

I made an original LCT quilt at Girl Scout camp retreat years ago. I liked the modern layout, so I offered the block and the pattern as a free tutorial for QOV. My own QOV quilt has long since been given to a veteran. 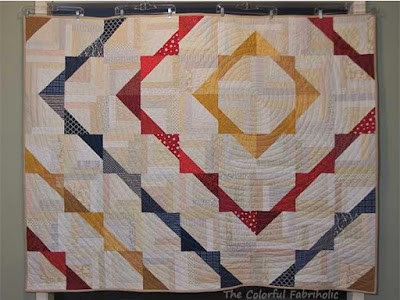 Because this pattern has a lot of pale negative space, I made another version last year to brighten up a dark hallway in preparation for selling our house.  My SIL admired it so I gave it to her. 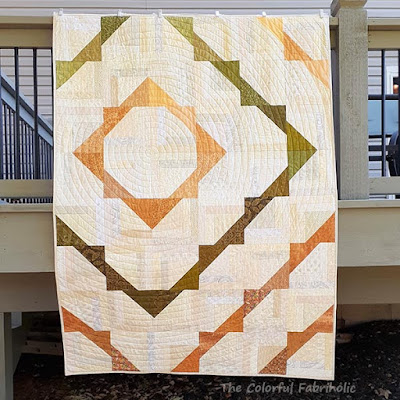 I need another version, possibly as a teaching sample, for a trunk show in December so I'm piecing a new patriotic version. This time I'm using bright white low volume prints instead of creams and ivories, and only red and blue for the triangles.
Starting the blocks: 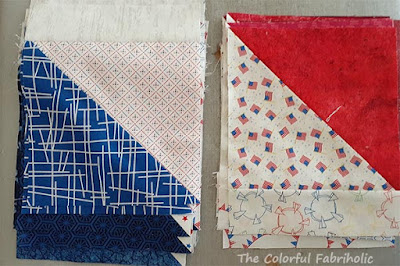 The first few blocks on the wall: 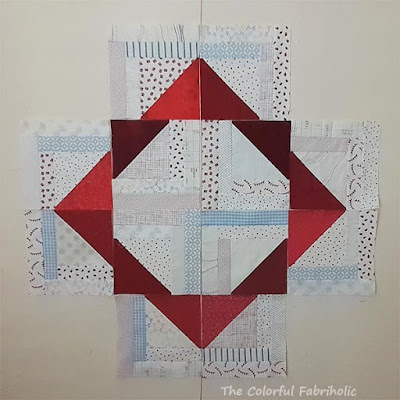 These blocks are so fast and easy to make. I'm hoping to make good progress on more blocks this month, in addition to my other ongoing projects.
Back in 2016, the LCT block drive generated hundreds of blocks for Alycia in Colorado, QOV of Eastern Missouri, QOV in the Loop (U City MO), and several other QOV groups around the US. Even someone from Canada used the block for an all red-and-white version for a Canadian QOV group.
The tutorial for the LCT block is still there for anyone who'd like to use it for QOV or any charitable purpose. A smaller version in kid-friendly colors would work for Project Linus or any social service agency that works with kids.
If you make a quilt using my LCT block, I'd love to hear from you and see your version!
Link ups: Small Quilts and Doll Quilts,
Love Laugh Quilt
Posted by The Colorful Fabriholic at 9:28 AM