Awhile back I mentioned that I had "adopted" some little 4-patches and swatches at my guild's orphan adoption event. Then I discovered that they were leftover bits from a project of my own from about ten years ago, that I had donated to a previous guild event. I still liked the colors, and I even still have some of these fabrics in my stash. 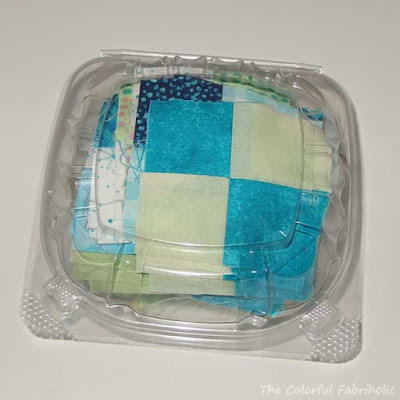 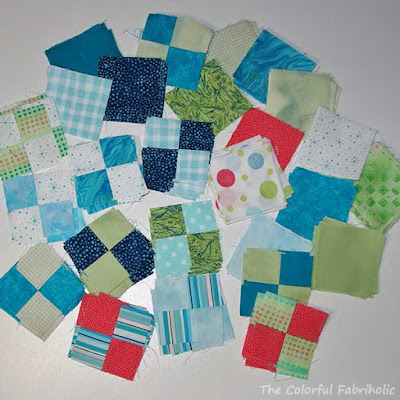 During my recent studio clean-up, I debated putting the box of patches away somewhere, or just using them right away. I ended up sewing them into nine-patches. 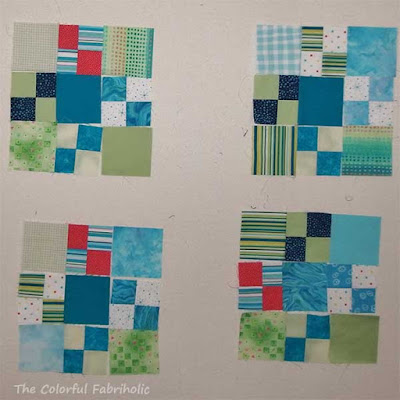 An on-point setting seems to be working. I added a green/blue stripe and some white-on-white to supplement the existing patches, so that I could use more of the white in the border and the stripe for the binding.

For setting triangles, I'm piecing together a few patches and framing them with a strip of that speckled dark blue, which is making a chevron border. I'll fill in the corners with the white-on-white. The cut strips of dark blue look a little heavy here, but they will finish the same width as the tiny four-patch squares, 1-1/4 inches. 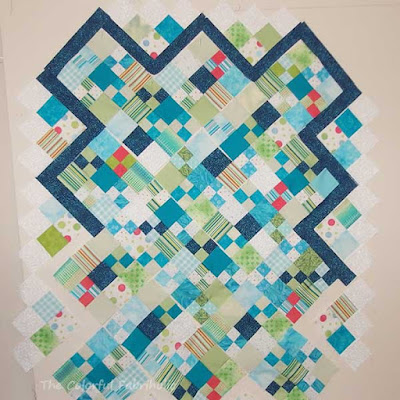 My friend Cherie donated the box of patches to the orphan adoption event. Our late friend Darlene had adopted the patches years ago when I donated them and had started a baby quilt out of them. Cherie helped Darlene's husband to deal with Darlene's stash, and ended up taking the baby quilt WIP and the extra patches. She'll finish Darlene's baby quilt, and she challenged me to see who finishes first, or maybe we can both finish them and show them at guild show & tell at the same time.

So one of my goals this month is to get these Boomerang Patches sewn into a flimsy and off the design wall.

Linking up with Patchwork Times, Em's Scrapbag, and Cooking Up Quilts
Posted by The Colorful Fabriholic at 8:25 AM