Sewing at the Quilt Cave with Kevin and Friends

I was honored to be invited to sew with Kevin the Quilter and friends at his Quilt Cave last week. We had such a good time!

It all started when Cherie posted a photo of an antique quilt top and I drafted the block for her. Kevin invited Cherie (Quilted Jonquil), Dar (Dar's Patchwork Garden), and me to his Quilt Cave to use this block to make a Quilt of Valor. 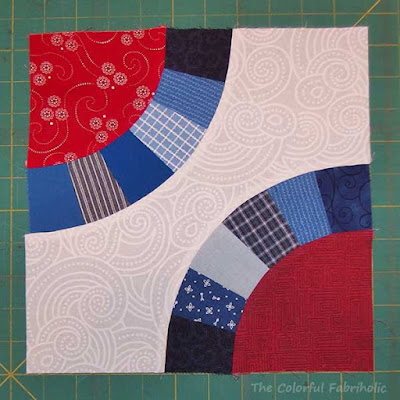 But first we had to visit the chickens and see the newly hatched baby chicks. So soft and so cute!!! At that point I hadn't unpacked my camera yet, so unfortunately no photos.

We gathered in Kevin's wonderful studio, large and very comfortable for four of us with ample room to spread out, multiple cutting stations, excellent lighting, and a giant design wall. Kevin, you rock! We started by cutting with templates, then paper piecing the arcs. 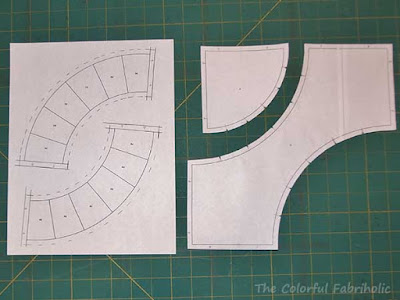 Cherie gave a refresher lesson on paper piecing. I'm so glad; her advice helped me tremendously. I don't love paper piecing and I had to rip out more than I cared to when I made the original test block. Cherie explained how and where to start, which side up/down, and how to align the next piece. Thanks, Cherie! 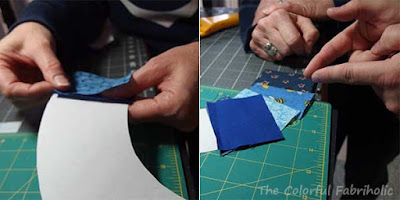 Then we were off and running. Each of us pieced at least one arc (me). Then I volunteered to sew curves while the others continued to piece arcs. Soon we had three blocks on the wall: 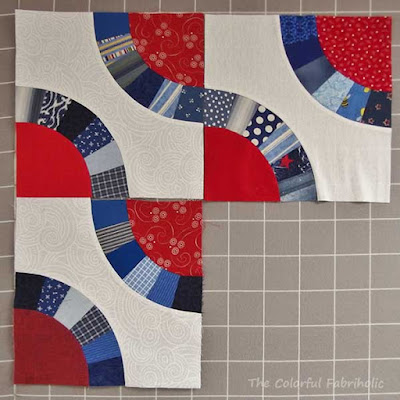 Three Blocks on the Wall

By lunchtime we had 5 blocks done, but it was becoming apparent that I couldn't keep up, sewing all the curved seams, with how quickly the arcs were piling up. 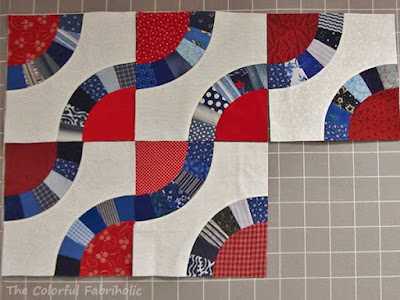 Five Blocks on the Wall

Kevin served a beautifully presented and delicious salmon salad. Check out his blog, I hope he posts a picture of it. It was definitely impressive.

After lunch I showed everyone how to sew the curved seams and get them to align correctly at the start and the end without going wonky. (Since I was demonstrating, I didn't take photos, so I'll have to get someone to help me and I'll post a tutorial later.) Eventually - with some muttering, etc. - each of us completed a block. 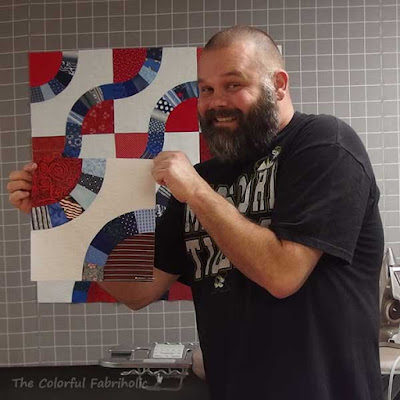 Kevin with his Block
Congrats on those curved seams, Kevin! 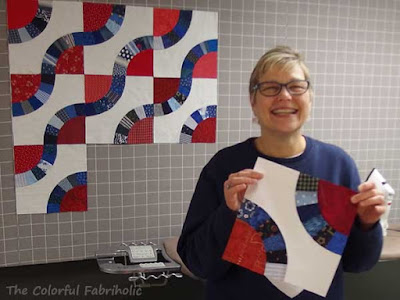 Cherie with her block
We weren't having any fun and we didn't laugh at all, all day. Not. 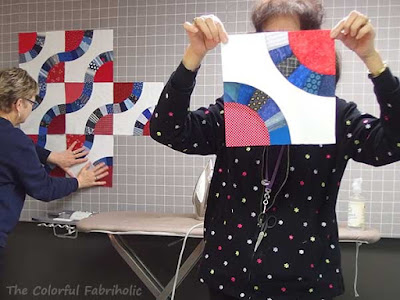 Camera-Shy Dar with her Block 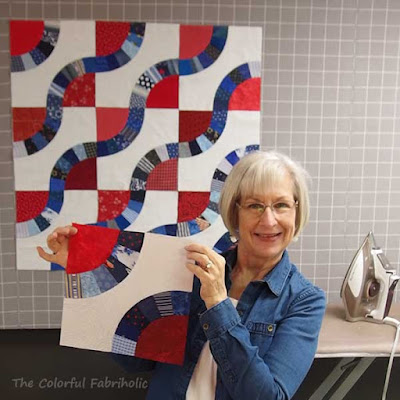 By the end of the day we had completed 14 blocks. I didn't think we'd get nearly this many blocks done. And we had such a good time!

You can see why this is called a snake quilt. We like the scrappy variety of fabrics, especially the blues. It's pretty amazing what four people can come up with together, just from stash. There's even a few patches in there from recycled shirts. I like that there's a lot of value contrast within the blue arcs, which kind of makes them sparkle. At first I thought all dark blues would be better, but the variety is much more interesting. 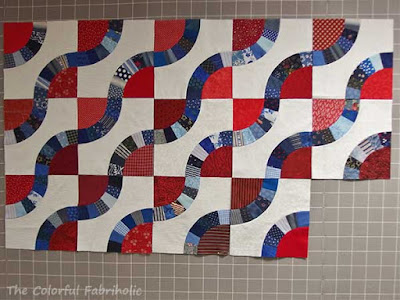 14 Blocks on the Wall

We've decided to get together periodically and sew until we get enough blocks done for a QOV. Since the blocks are 10" and we want the quilt to be 60" x 80", we need a 6 x 8 layout or 48 blocks.

Thank you, Kevin, for inviting us, for being such a great host, for the magnificent lunch, and for such a good time together. It's so much fun to get together with others who share my love of quilting, do what we love all day, laugh and chat while we're doing it, and end up with such a worthwhile project. I'm so looking forward to our next get-together. And I've promised myself that in the meantime I will master paper piecing these arcs; my goal is to achieve at least one without having to unsew anything.


Since this was a social sewing event, I'm linking up with Let's Bee Social at Sew Fresh Quilts.
Posted by The Colorful Fabriholic at 8:51 AM