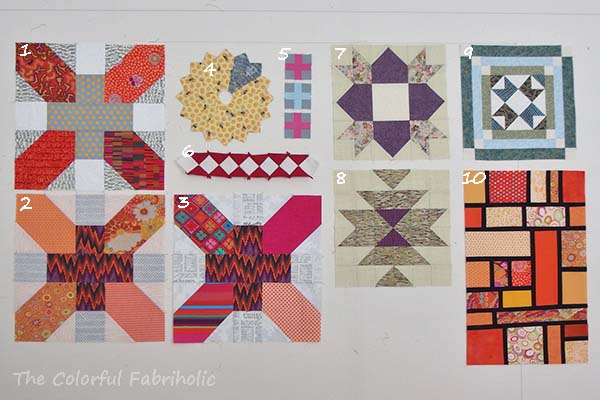 1, 2, 3:  Bonus blocks for someone else's special project. Only two blocks were requested, but I made #3 first and I didn't like the value contrast so I made #1 to replace it. I'll send #3 anyway in case she can use it after all.

4, 5, 10: Sew Bee It bee blocks. Due to various scheduling issues, blocks for April/May/June were handed out in May and are due at the July meeting.
4: Dresden Plate featuring bee fabric
5: Very tiny Plus blocks
10: Mosaic slab

6: Piecing Group bee block: hand pieced sashing unit for the recipient's Baltimore Album WIP. Not pressed; we float all the seams in hand piecing and the block's owner will press the seams as she wishes.

7, 8: Blocks for weeks 22 and 21 of Pat Sloan's Solstice Challenge. I'm caught up until block 23 is released later today.

9: May block from The Quilted Fox's First Saturday BOM. This is block 9 of the series. I've made all the main blocks and I have the kits for the alternate blocks, but I'll wait to make them until I see the suggested layout at the end and see if I like it or want to change it up.

Lots of variety! This is what I've been busy sewing lately. What's keeping you busy?

Linking up with Sew Fresh Quilts
Posted by The Colorful Fabriholic at 7:31 AM