One of the projects I took to work on at retreat was my Dresden Medallion. I wrote about kitting it up  back in June, and I've made good progress since then. 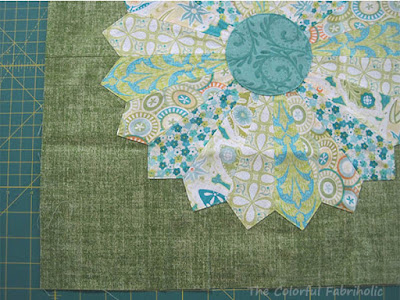 The first round is Shoo Fly blocks. The HSTs were die-cut and the blocks were kitted up in baggies, so these blocks came together quickly. 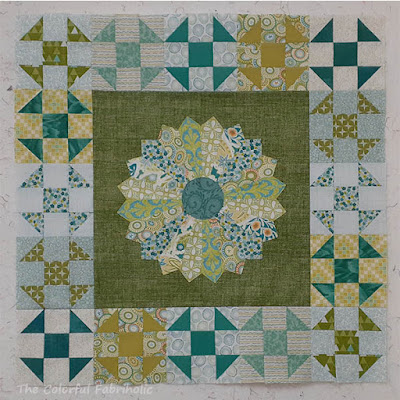 Next came a border, then appliqued Orange Peel blocks. Since applique is not my thing but this quilt needed it, I made test blocks ahead of time at home to work out the technique that would suit me best. I also paired up the fabrics ahead of time and cut the background squares. There are 28 Orange Peel blocks and I made them in pairs, alternating with other piecing because I just couldn't power through 28 applique blocks. 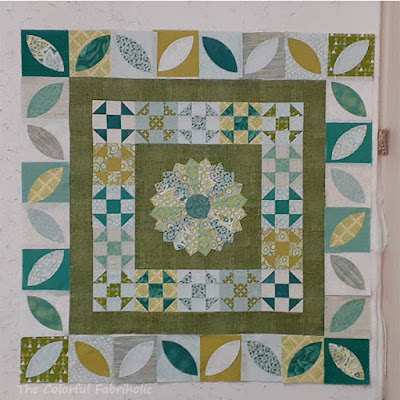 Another border, then Friendship Stars. Again, these were die cut and kitted up so they were quick to piece. And piecing them in between appliqueing Orange Peel blocks helped. 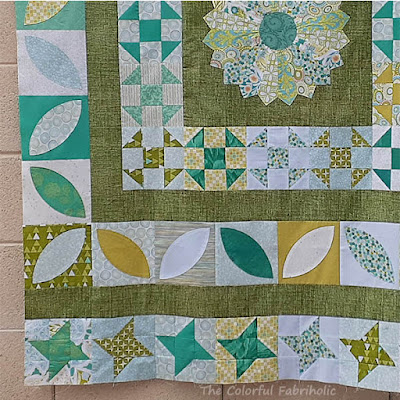 Although the Friendship Star blocks were pieced at retreat, I didn't get them sewn on. Ran out of time. And I had one pair of blocks I wasn't happy with; the fabrics didn't play as nicely with the others as I would have liked. So when I got home I replaced the rejected blocks, sewed the Friendship Stars into rows, and added them to the quilt.
Now it's a finished flimsy, measuring 48 x 66", lap quilt size. It would have been nice to add a final border all the way around, but I don't have enough of that fabric and can't get any more. 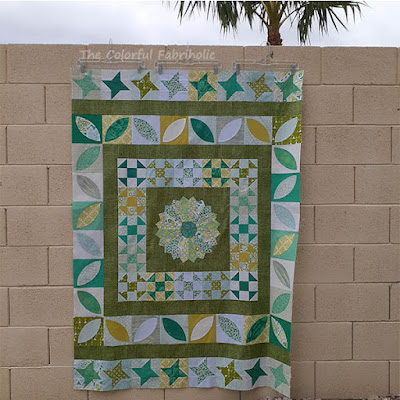 I have no particular purpose or recipient in mind for this quilt; I'm just making it for the pleasure of playing with fabric and color. The girls at retreat suggested I think about donating it to the fund raising efforts for the expansion of PebbleCreek's Creative Arts Center. We'll see, after it's quilted.
The colors look much better in person than in these photos because my phone's camera distorts yellow greens, making them look brownish. The palette looks much prettier in person. 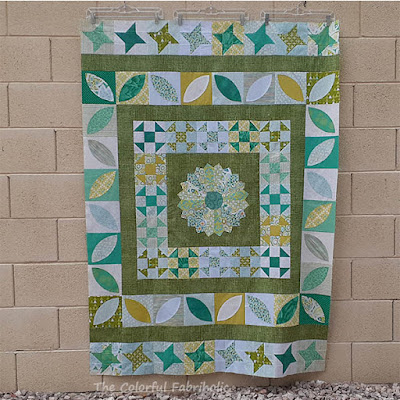 There are 34 different fabrics in this top. I've had many of them in my stash for years. I've used them in other projects, here, here, here and for a couple of donated tops that I don't have photos of. Since I started this project with scraps, partial FQs and small bits of yardage, and I die cut more triangles than I ended up using, there were lots of little bits left over. My friend loves to work with the tiniest scraps, so my leftovers have already started to become her next project.
Now to come up with a plan for quilting this. I may ask for some advice; the friend who's using the scraps is an excellent quilter and I'm sure she'll have some suggestions.
Linking up with Alycia Quilts and TGIFF

Posted by The Colorful Fabriholic at 9:26 AM