Where to begin???
I had so much fun at Sew Me STL this weekend!
Sew Me STL is the annual weekend retreat of the St. Louis Modern Quilt Guild.

For me, it started with my Cut and Shuffle Workshop on Saturday morning. There were 14 students in my class and they were all awesome!

We made three of the blocks from Cut and Shuffle Quilts. We started by making Block Mamas, then marked cutting mats for accuracy, cut and shuffled block parts, and assembled the blocks. 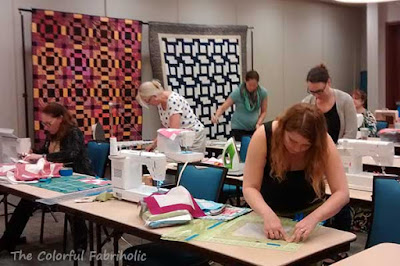 Making and Cutting the Block Mama
Everyone was so focused! They all got their cutting mats marked with tape to assure that they cut their Block Mamas apart correctly. Then they all went to town making blocks. We started with the Plus Block. 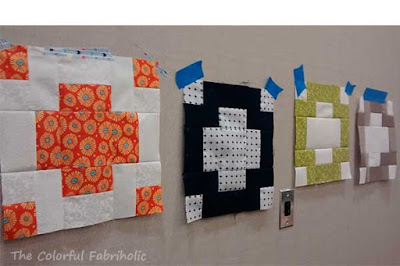 Plus Blocks Made by Students
Everyone seemed to get into making blocks this way, using the Cut and Shuffle method. After the Plus Block, we made Four Corners blocks. 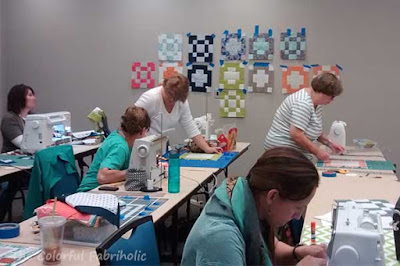 Cutting and Sewing the Blocks
﻿
﻿
And then Labyrinth blocks. Some people even went on to make additional blocks; I showed them how the shuffled parts can make a Hashtag block, and the Antler Dance block I'm currently working with. 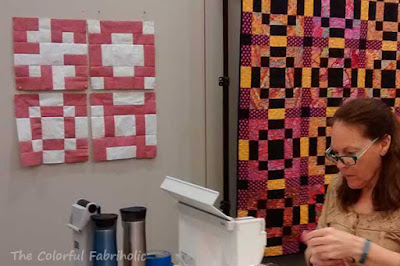 Blocks on the Wall

By the end of the workshop nearly everyone had finished their class blocks. We talked about fabrics a little bit. My cut parts sample had a directional print and I showed them how to mix it up so the print would go in different directions in the finished block. We talked about value and contrast, and how greater contrast makes the block shape more apparent and how similar values make the contrast much more subtle. 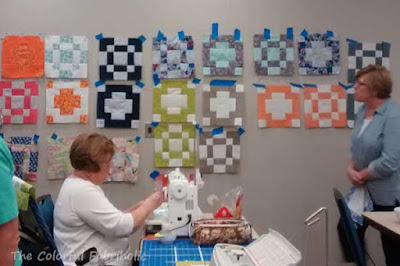 At the end of class, I offered bonus kits to any student who wanted one, for them to make a Four Corners block during Sew Me STL. About half of the class took kits and made blocks, and I put them together into a top which I'll finish for our Project Linus drive. They did such a good job, all the blocks came out the right size and went together well. 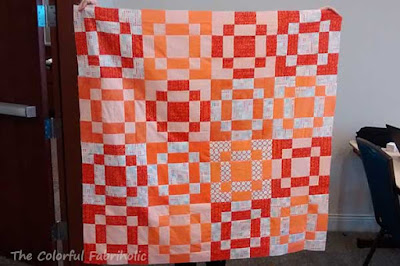 One of my students went on to make a whole set of blocks for another Project Linus quilt. She included the blocks from class, plus the Hashtag block. I can't begin to tell you how gratifying that feels, to have someone appreciate my blocks and method and class enough to go on to make more for such a worthy purpose. 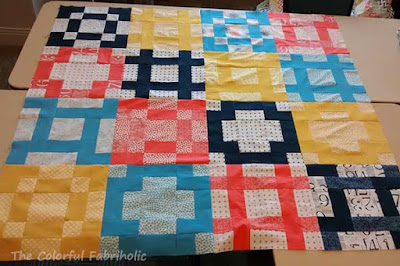 The rest of Sew Me STL was great, too. I sat with some of the members of my bee, and we worked on bee blocks. One of them was huge, and very difficult and confusing, not because of the block, but because of how the pattern was written. And some of us had only black & white copies of the directions. Thank goodness Marie had figured it out and coached the rest of us through the process! We got several blocks done and Chrissy was able to sew them together. She's making a Moroccan Tile quilt for her newly decorated living room. Thanks, Marie, for your help! 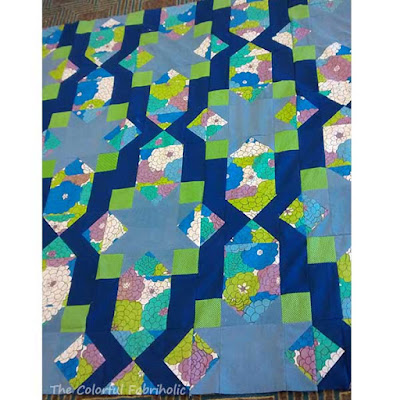 I was able to get my Antler Dance blocks sewn together and the top and bottom border made. Then I discovered I didn't cut enough plain pieces for the border, and I'm out of fabric. No worries, it's Kona Bone which I bought locally in September so I can get more. You can see how the borders finish the motifs. 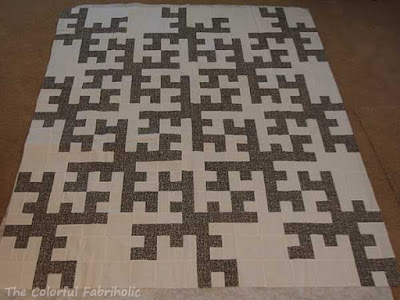 I was hoping to get the Antler Dance top finished so I could count the fabric out of my stash. Didn't happen, but I'll get more fabric and finish the top this week. I can, however, count out the fabrics for the bonus Cut and Shuffle kits because the Project Linus top is finished, so that's 2-1/2 yards out.

It was really fun to hang out with my friends and sew all weekend. And - bonus! - I won a door prize: a print to frame for my sewing room, a thread catcher, and a big bundle of very colorful zippers (forgot to take a photo).

I have to admit, when I got home yesterday, I was really tired! Now I have all my weekend chores to catch up on, so I'd better get off the computer and get going. The sooner I get them done, the sooner I can get back to sewing!

Linking up with Judy at Patchwork Times


Posted by The Colorful Fabriholic at 8:44 AM