If you've seen some of my earlier posts this month, I've kind of teased about a new project using red fabrics and involving Dresden Plates. Let's back up and see where that came from.

One of my goals this month is to prep something to work on at retreat next month. So it's okay to start a new project, right? It's not really totally new; it's been percolating in my mind and in several iterations in EQ for months.

Inspiration: Back in April at the Paducah Spring AQS show I was quite taken by a rich mostly red quilt that was made by Carol Sloan Brix of Byron IL.  She used a pattern called Chippewa Nine Patch by Minick & Simpson. Here's what the pattern looks like, and the quilt in the AQS show looked just like this, same palette. 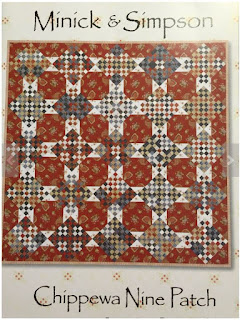 The quilt was huge, and in the lighting of the show, the reds were very rich and deep. Very luxurious. What I particularly like, in addition to the palette, is the combination of diagonal and vertical movement around the quilt. I like the checkerboard blocks, too - that's a lot of piecing!!! - and the snowballed corners of the alternate blocks. Because I was so struck by the palette and the piecing, I honestly don't remember how it was quilted.

While in Paducah I started collecting red fabrics, mostly Civil War era reproductions, and a few blues and neutral prints to go with them. 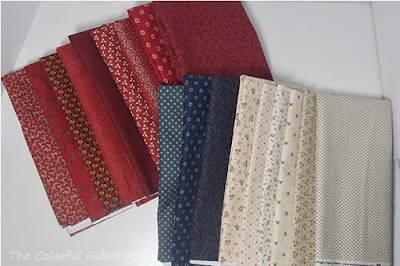 I thought about ordering the pattern and making it as is. And I played in EQ. And I came up with this: 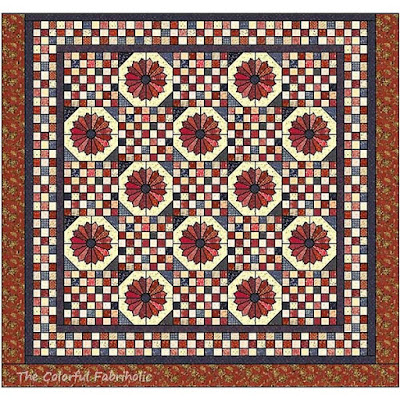 This is huge, 102" wide x 96" high, a large bedspread for a queen bed. What I like about it: the checkerboard blocks, the strong diagonals created by the alternate blocks with snowballed corners, the dark rich palette, and the simple construction with no on-point setting required. Special thanks to Minick and Simpson and to Carol Sloane Brix for the inspiration.

So now I've collected more fabrics (my stash report this month will take a hit!) and I've made test blocks. This will be sort of a BOM project; my plan is to make one checkerboard block and one Dresden Plate block a month.

I mentioned in an earlier post that I'm getting together with friends on the first Saturday of each month and we're doing our own BOM thing. Since I'll have to miss the October meeting, this post and the earlier ones this month about the red project will have to suffice.

This project needs a name other than just "the red project." Any suggestions?

Linking up with Whoop-Whoop Friday at Confessions of a Fabric Addict because having a plan and starting a new project is always whoop-worthy, right?!

Posted by The Colorful Fabriholic at 4:30 AM