Full disclosure: I screwed up when I was making the sample for my Strippy HSTs for the PC quilters. Not only did I not follow my own pattern, I made the same mistake for half-a-quilt's-worth of blocks before I discovered the error. Which was unfixable at that point.

Here's what the block is supposed to look like. Note that the strips run perpendicular to the diagonal  HST seam. 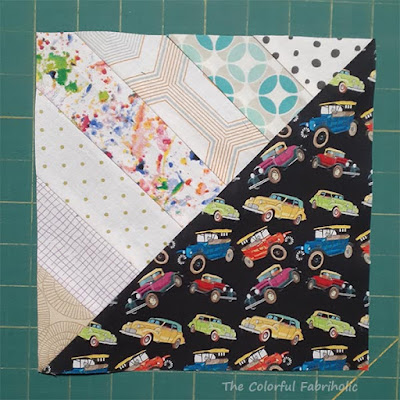 When making the blocks the HST seam should be oriented like this, going perpendicular to the strippy seams. See tutorial here for the block. 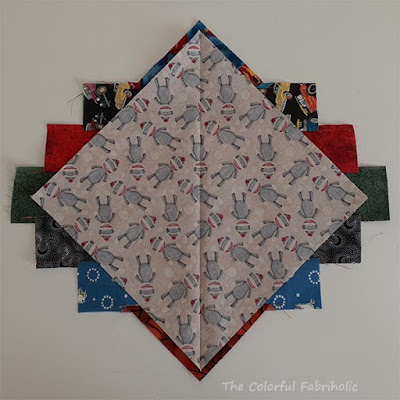 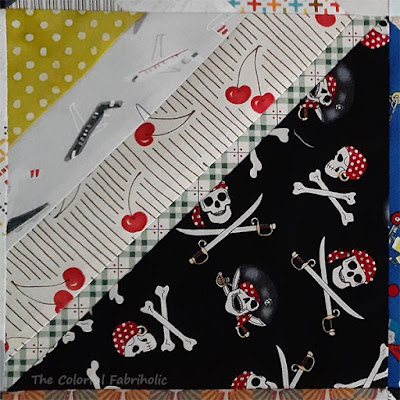 I didn't discover the error until I had already cut apart the HSTs to make two blocks. But it wasn't just those two blocks.  I had started making a batch of 24 blocks and didn't discover the error until I had cut them all. So I had 24 blocks, all made with the strips going the wrong direction, and all cut so I couldn't fix them.
I decided this wouldn't be a problem, it would be a design decision. After all, this is a quilt for a kid. He's not going to know or care what direction the seams in the block go. So I used all my "bad" blocks anyway. Let's not call them bad blocks; we'll just call them B blocks.
I ended up making another set of regular blocks so I had enough correct ones for the teaching sample, shown here: 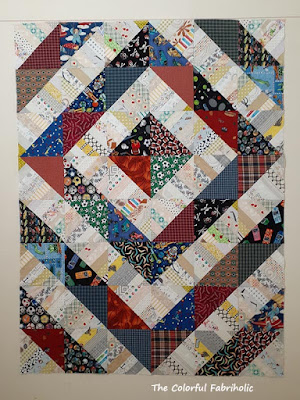 But since I had half-a-quilt's-worth of B blocks, rather than let them go to waste I made another batch of regular blocks and mixed them in the same quilt. It turned out fine. Here are both regular (top row) and B blocks (bottom row): 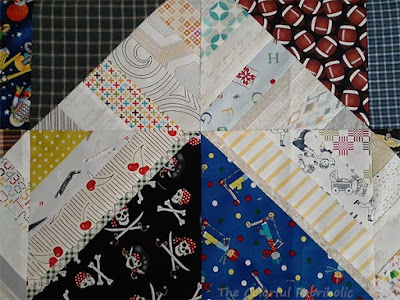 It truly doesn't matter what direction the strip seams go. What's important is the light-dark contrast of the HSTs. Here's the second top, made with half B blocks and half regular blocks: 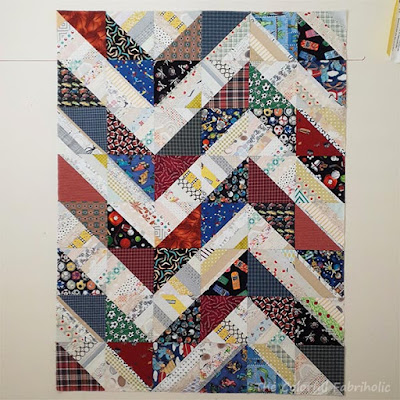 With these blocks, any layout that works with Log Cabin blocks or with HSTs is fine. This chevron layout is just one possibility among many.
Now that both the class sample top and the B-Blocks top are done, both using the same fabrics, these two tops are like fraternal twins. Someone from the PCQ club will long arm quilt them for charity. Then I'll bind them and turn them in so they can be delivered.
I told the girls when I was teaching the block that it was very forgiving. A couple of people accidentally made B blocks and I told them their blocks and their quilts would be fine, no problem. For donation quilts, no one is going to care which way the strip seams go. Both of my tops are perfectly acceptable, B blocks and all. As I said, very forgiving.
Link us: Small Quilts and Doll Quilts, Love Laugh Quilt
Posted by The Colorful Fabriholic at 12:05 PM