I've been wanting a more complex, longer term project than the baby quilts I've been churning out lately. I've been looking at Jen Kingwell's and Freddy Moran's work. Perhaps with those inspirations I can come up with something.

To that end I made a test block. Steam Punk / Airship Propeller blocks were the inspiration; my own templates printed from EQ. 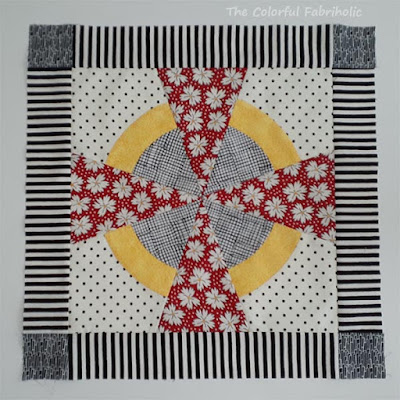 I'm not thrilled with it and I think I'll explore other possibilities before I commit to something like this.

I've been playing with the concept in EQ and it just feels like I'm trying too hard for something that's not coming together. What I've learned: So, I'll file this test block in the orphan blocks drawer. Maybe it'll become the center of a round robin style baby quilt someday. In the meantime, I'll keep thinking about what I want for a longer term project that doesn't try so hard to copy someone else's style.

Posted by The Colorful Fabriholic at 7:38 AM