Another Black and White Project

Several months ago Quilt Diva Julie sent me, for my club's charity quilts, a big box of black and white fabrics. Story here. I put together and set aside set aside several kits to assemble at social sewing, and put the rest of the fabrics in the club's stash. So far I've made Bolt of Lightning and Steppers, and I have two kits left to work on at social sewing.

The one I'm working on now was inspired by some things I saw on Pinterest, but I don't know whom to credit. It features colorful four patches and bricks of B+W prints that read either dark or light. Thank you, Julie, for the wonderful variety of prints you sent!

All the four patches have been pieced and attached to their bricks. 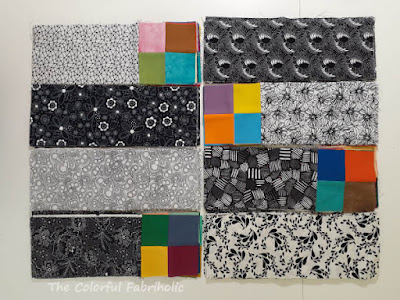 The four patches are very random. I had a couple of mini charm packs and a friend gave me some additional scraps so I'd have enough, with a lot of variety. A few of the patches are Grunge or blenders, but they're mostly solids or read as solid.

My only concern when making the four patches was not to have two of the same color side-by-side. As a result, each four patch is different. Totally by accident, some of them are actually very pleasing palettes that could work together in a quilt. 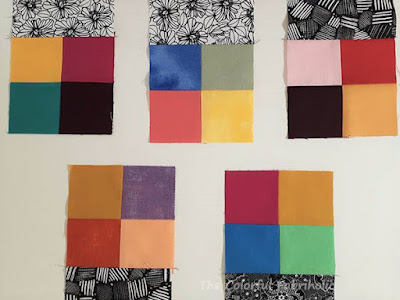 These look better in real life than they do in this photo. The dark patches in the top row are actually dark plum. I really like the grouping at the lower left.
This week at social sewing I'll get the blocks all made. They all have to be assembled with the four patch in the same corner, so I'll have to pay attention to orientation when I sew them. Maybe I'll get to the point where I can put them on the design wall and lay them out. We'll see.
Linking up with Small Quilts and Doll Quilts and Love Laugh Quilt

Posted by The Colorful Fabriholic at 8:59 AM